The Best Restaurants In Aarhus – Denmark

Aarhus – often described as The City of Smiles – is on everyone’s lips at the moment. Aarhus has been exalted as a must-visit destination in recognized media such as Vogue, CNN, National Geographic and Momondo, after the capital of Denmark, Copenhagen, – with restaurants such as Noma, Geranium and Relair – has placed Denmark on the world map as a gastronomic mecca.

However, the last couple of years the second largest city in Denmark, Aarhus, has challenged Copenhagen’s patent on Michelin-starred and Michelin-recommended restaurants, and proved that the Jutland capital is also “a Nordic star”, as proclaimed by The Guardian in 2016.

Aarhus offers everything from small, affordable restaurants to casual brasseries to superb Michelin restaurants, and has become the home of a growing number of creative gourmet chefs that are inspired by cooking traditions from different corners of the world or are true to the famous New Nordic Cooking style – a trend that has escalated since Aarhus was acconced as the European Capital of Culture in 2017. 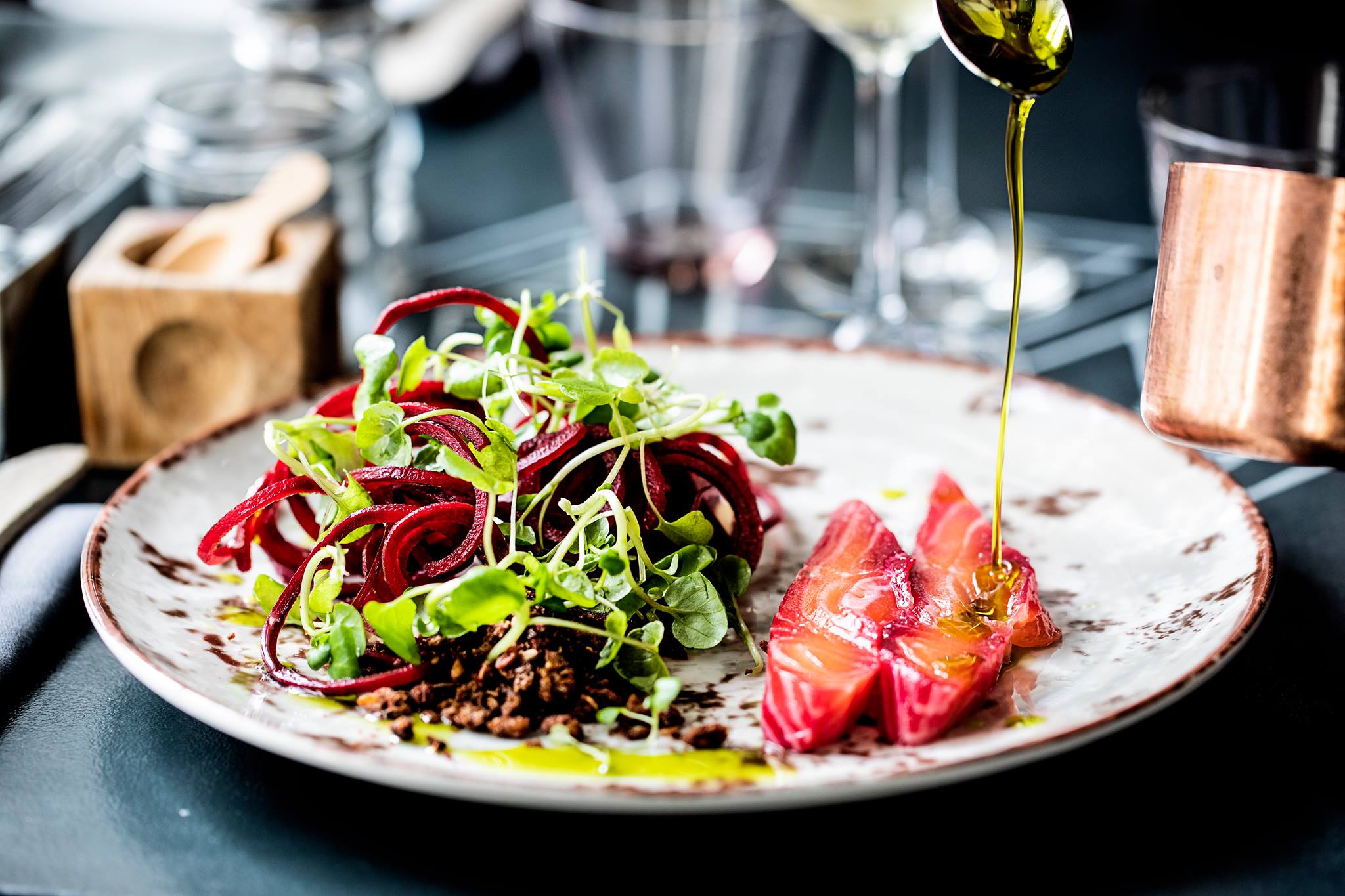 With the ambition of offering the guests a “space” from everyday stressfulnes, Restaurant Mellemrum (meaning ‘space’ in Danish) is one of the best restaurants in Aarhus. It is located in the center of Aarhus, and is famous for its elegant Nordic gastronomic dishes, served in informal, inviting surroundings and pleasant atmosphere.

There is plenty of room around each table and the menu has been described – by several Danish food critiques – as one of the best vegetarian menus in the city (although the restaurant also offers non-vegetarian dishes). Restaurant Mellemrum has therefore received great reviews in different Danish media.

Established and still run by the circus family Belli for 20 years, Brasserie Belli has cemented its indisputable importance in the center of the Aarhusian café and restaurant life as one of the best and most popular restaurants in Aarhus. The service and decor is charming and unique.

The kitchen offers traditional French bistro food, where the ingredients come from local suppliers or Belli’s personal herb garden. The charm and great taste has led to the inclusion of Brasserie Belli in the Michelin Guide for the first time in 2015.

Restaurant Ombord is based on three principles: cozy atmosphere, good craftsmanship and nice energy. At Restaurant Ombord you are promised unique dining experiences, where the guests share different dishes – tapas style – around the table (thereof name Ombord, which in Danish both refers to the fact that you are onboard the dining experience and that the guests eat around the same table). The dishes are affordable but at the same time of high gastronomic quality. The cosiness and presence at Restaurant Ombord makes it one of the best, must-visit restaurants in Aarhus.

Restaurant Komfur serves classic French bistro food. Like it’s two sister restaurants, Mellemrum and Ombord, the core values of Komfur are: craftsmanship, cosiness and energy. A reviewer of Aarhus Stiftstidende concludes “… it’s classic good food inspired by the French peasant cuisine, and Komfur is definitely worth a visit”, and gives 4 stars to the restaurant.

Slap Af offers delicious food made by seasonal, Nordic ingredients prepared using traditional French techniques. The dishes surrounds the nature of Aarhus by using local ingredients, for example are herbs such as ram onions collected at the nearby forest.

Each week the restaurant constructs a 2- and 3-course menu, giving a price that does not overturn the budget. As the name suggests, the ambition of Slap Af is to offer a place where the guests safely can go and get a meal with cosy and comfort settings.

At restaurant Latin you’ll get a credible, honest and authentic bistro meal. With a classic french menu which includes, among other things, Moules Marinières, homemade fish soup, Steak Bearnaise and Gateau Marcel, you can look forward to a French culinary experience. Step inside and experience jazzy tones, a French atmosphere and fine dining – toast in French grapes and have a lovely dining experience at Latin. 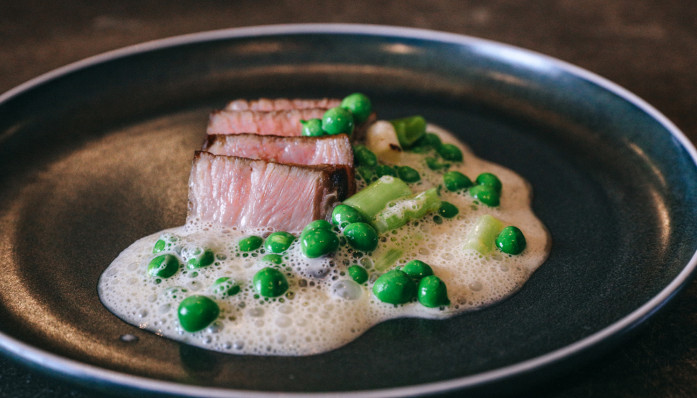 Bar Plata is known as the largest gin bar in Aarhus, and has previously had its address in the cozy basement rooms under CANblau Tapasbar. As the name suggests, Bar Plata Cocktail Bar & Dining is now a combined cocktail bar and restaurant. The 1st floor is designed for the dining area where you can sit back and relax.

Since 1996, restaurant Dauphine has been of central importance in Aarhus at the quiet pedestrian street Frederiksgade. Originally, restaurant Dauphine was an informal brasserie, but since then it has become more and more recognized as the ambitions of the chefs and restaurant has grown through the years. The name Dauphine means crown princess in French, which emphasizes and harmonizes with the restaurant’s excellent Danish-French gourmet cuisine style as well as it’s acclaimed position in Danish media. 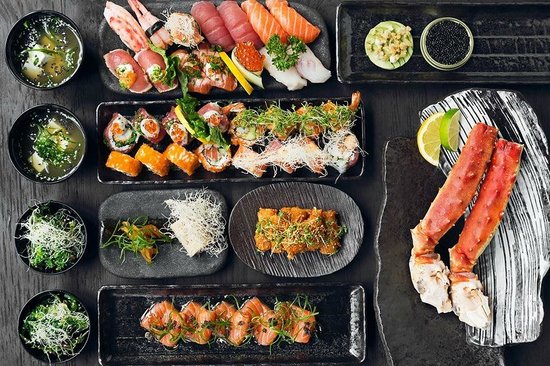 Karma Sushi is located in the cozy pedestrian street Frederiksgade in Århus. As a contrast to the widespread mainstream sushi restaurants in Denmark, Karma Sushi has gradually grown to a number of alternative sushi restaurants around the country, with great popularity, taste and recommendations in Danish media.

The core concept at Karma Sushi is to innovate sushi – and thus go against the above-mentioned ‘mainstream sushi’ – bringing different styles of sushi into play. The result is gourmet fusion sushi – but at an affordable price, and with a taste that both the novice and the experienced sushi connaisseur will enjoy.

Jan L. Pedersen from the Danish news media Aarhus Update has described Karma Sushi as: “One of the biggest positive surprises I have experienced in Aarhus for a long time”.

Restaurant L’Estragon is recognized in Aarhus for its local, seasonal, ecological and biodynamic approach to cooking. In the kitchen, frankophile flavor-fantasies are conjured, inspired by Sisse Budtz: the owner, the brain and the heart of restaurant L’Estragon. Food critics from different Danish media praise L’Estragon for it’s cooking style, atmosphere, passion and love for French food, and describes L’Estragon as one of the best restaurants to visit in Aarhus.

Eat and smile in the The City of Smiles

Aarhus is a small, intimate city with lots of culture and history. The capital of Jutland was originally known as Aros (Old Danish for the mouth of the river), and was founded around the year 770 by the mouth of Aarhus Å (a large river in Aarhus), which was central for trade in the Viking Age in Denmark. From the industrialization of the late 19th century onwards, Aarhus underwent a profound development architecturally and culturally, and the composition of the population furthermore changed. Over the years Aarhus has built exciting attractions and museums, and is home for dining experiences with tastes from all around the world – all within walking distance in Aarhus.

You may for instance visit The Old Town – a living museum with buildings from a classic Danish borough from the period 1550-1927 in size 1-1, although one single department is also dedicated to the 1970s hippie-time. The Old Town is an unconventional musem in the sense that you are allowed to interfere with the ‘art’: you may open the drawers in the 1950s family kitchen, listen to Bob Dylan vinyl record or dial up a rotary phone. As part of the Old Town, the cooking style from the different historical periods is also preserved – and has even received the maximum of three Michelin stars in the Michelin Travel Guide.

As an alternative to The Old Town, you can also visit the contemporary museum ARoS in Aarhus, where you for instance can walk inside the artwork ‘Your Rainbow Panorama’ by the world-renowned Danish-Icelandic artist Olafur Eliasson. As the name of the artwork indicates, it gives you a panoramic view of Aarhus in all the colors of the rainbow. At ARoS, you can also enjoy a tasteful, sustainable and artistic meal in the ARoS Food Hall.

In walking distance from beautiful Marselisborg Forest, you can also get an adrenaline rush at Tivoli Friheden (meaing ‘Freedom’ in Danish), Aarhus Amusement Park. Likewise, you can watch weird, funny and thoughtful independent movies in the famous movie theater Øst for Paradis (meaning ‘East of Paradise’ in Danish), founded in Aarhus in 1978. Are you into playing pool, you should definitely stop by Denmark’s largest pool bar, ‘Sharks’, in the center of Aarhus, which in addition to pool also houses electronic poker, air hockey and billiard games.

In addition to different cultural attractions, there are of course also the many gastronomic experiences in Aarhus, which in recent years have put Aarhus in the spotlight on the international gastronomic scene. Among other things, the aarhusian restaurants Frederikshøj, Gastromé, Substans and Domestic have achieved and retained Michelin stars. The city’s world-class gastronomy is – besides the many creative gourmet cuisines in Aarhus – due to the high commodity quality of aarhusian food, including locally produced, seasonal, fresh vegetables from Samsø and Djursland, freshly caught fish from the bay, etc.

In 2017, Aarhus’ cozy, historic and vibrant cultural and urban life and exciting dining options led to the announcement of Aarhus as the European Capital of Culture, which resulted in a total of 442 cultural projects involving thousands of Danish and international artists across the Central Denmark Region, in addition to the establishment of almost 2000 full-time positions and a revenue of DKK 1.1 billion in the private sector in Denmark. In 2018, this is followed up by a new oppertunity for Aarhus: to be the host for the World Cup for all Olympic sailing classes: the biggest sporting event in Denmark ever, with participation from over 100 different countries. These different events have contributed to and contribute continuously to developing Aarhus.

Visit, enjoy and eat in The City of Smiles –  You’ll definitely get a smile on your lip as well.

Sugar leads to early death, but not due to obesity

Ritalin and similar medications cause brain to focus on benefits of work, not costs